Food and beer, a natural combination... 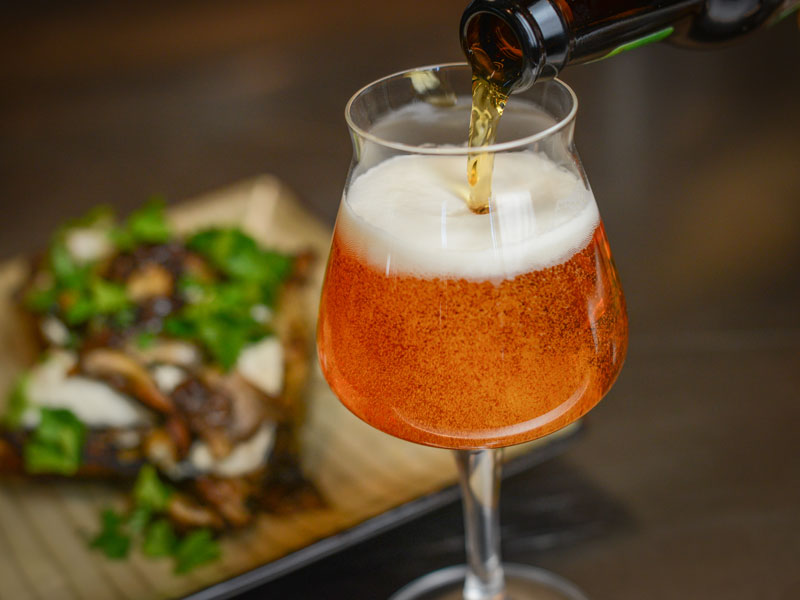 It seems nearly unbelievable that in the past 2 decades beer is starting to compete with wine and cocktails as a compliment with food. Gone are the days that a simple lager from one of the big producers would be drunk with a pizza or a burger & fries combo thanks to the rise of craft beer. Today with the huge variety of old traditional beer styles and up and coming new styles things have become more complicated on how to pair your food with beer. There are several breweries that were set up by chefs we know of - the quintessential Two Chefs Brewery in Amsterdam which has even set up their own gourmet restaurant called Bar Alt after setting up their brewery whilst the world renown NOMA restaurant had such a close relationship with Danish craft beer mastodons Mikkeller that they even made a collaboration named after the former Noma sommelier, Pontus. Also one of the former chefs working under Noma’s René Redzepi, Matt Orlando even set up his brewery next to his restaurant Amass called Broaden & Build with 22 taps. One of the breweries in our portfolio Oproer started of as an award winning vegan brewpub in Utrecht before increasing their capacity with their a bigger independent brewery.

"Brewing beer is a creative process in which you’re learning how to transform flavor completely.” Matt Orlando, founder and head chef at Amass and founder of Broaden & Build in Copenhagen.

Even in Bulgaria craft beer is starting to be accepted by restaurants, Aubergine blazed the trail in Sofia with an extensive list of Bulgarian craft beer that they pair with their menu and had launched their own house Hallertauer Blanc Dry Hopped pilsner last year to mark their third anniversary. Beer with its multitude of varieties is becoming a talking point at restaurant tables across the country...

So we thought of making things a bit easier and try to set up a quick go-to guide for those who want to drink beer with their meals or when out in a restaurant with the waiter hovering around for your order..

Let’s start with the most popular beer style, lagers and pilsners… Without thinking we come to fast food from pizzas, to burgers, hotdogs and fries that is the easy part. Lagers are white canvasses that would refresh the palate and wash down food easily. It could be paired with meze and salads, chicken dishes and shellfish - light food with light beer. But for the maltier lager and pilsner varieties we recommend a grilled steak! German pilsner should go with any sausage - bratwurst über alles - but why don’t you try some piroshka for a change? Bock beer, a close relative of lager goes well with pork chops, roast potatoes and grilled vegetables, exactly what you want in autumn weather.

Belgian traditional beers have a stronger malt flavour ranging from caramel to toasted malt and due to their bottle conditioning carry more phenolic spicier notes from the yeast. A Belgian Blonde is great with fish and chips or even Japanese tempura whilst sweeter Tripels are great with roasted turkey. You could also drop the red wine and try a Quadrupel, thanks to its dark sugar and malty sweetness, light body and strong alcohol if you are ordering duck breast. Amazingly if you are in to white cheese or have a shopska salata addiction - Belgian beers are your best friends.

Wheat-based beers such as witbier and German weizen thanks to their phenolics - spicy for witbier and banana for weizen, go well with seafood. Witbier - think Hoegaarden, is traditionally eaten with mussels and fries thanks to the added coriander and orange peel so next time you are in, or got a batch of mussels from Kaliakra you know which beer to go for. Mussels and Saison beer also work if you want a light peppery spice addition. If you love desserts, key lime pie with a Hefeweizen is a winner!

English-style beers have it easier - you can not have a fish and chips without ordering an Extra Special Bitter, or maybe some roasted chicken whilst amber ales go well with BBQd meat and pork the same counts for English India Pale Ales - and if you are in to English cheeses like cheddar, stilton etc stick to the English-style entry and phenolic beers. Musaka and kiufteta goes well with amber or brown ales too and if you like red ales - try it with some Stefani roll or a meatloaf.

This brings us to American Pale Ales and IPAs which carry a lot more hop aroma… For American Pale Ales you can fire up the barbecue and start your favourite skara menu without thinking and have apple banitsa / strudel to finish it off. If you are in to spicy food or bean based stews, American IPA’s with their high hop content are a great pairing whilst Imperial IPA’s with salmon or pork knuckle is amazing!

If you have ever been to Ireland you may have seen some old Guinness advertising with a platter containing a huge crab or a lobster - this is what the Irish like to pair their Porters and Stouts with but there are other interesting pairings too. Red pepper mezze or even the hotter variety go well with a nice smokey porter and for the meat eaters ribs, with or without BBQ sauce, grilled lamb or even cooked ham go well with Stouts. If you are a sweet tooth these darker styles are for you they pair well with coffee, chocolate or cheesecakes.

Sour beers are mostly an acquired taste for the uber beer drinkers and boy does the sourness need food! You should treat it like rakiya and have lots of mezze. Stinky cheeses, especially goat’s cheese with some fresh fruit, cured meats and maybe an omelet covered with kaskaval are good choices as an aperitif whilst seafood such as crabs and raw oysters are great too. If you love Indian or spicy food this is your go to beer. Finally if you like ice cream a fruit based-sour beer is a good combination too.

We are sure to have missed out some of your styles, so let us know your favourite. We may be able to help pair beer with your next meal!